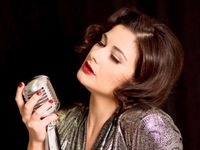 Singer and actress, Viviana was born in Italy (Sicily). She has been based in London where she has graduated at The American Musical Theatre Academy of London and thanks to her great versatility, she has approached the world of jazz, researching common features between jazz music and musicals, and taking this stunning experience of contamination as a starting point, she has developed an innovative repertoire of music and songs somehow recalling the music from the American Songs Real Book which she endeavours to re-interpret by drawing inspiration from great female singers like Billie Holiday, Ella Fitzgerald, Anita O'day, Sarah Vaughan, and the theatrical verve of actress-singers like Julie London, Marilyn Monroe and Judy Garland; she also likes to venture into other genres that suit her voice and style, like Bossa Nova, Pop, Italian Classics, Musical theatre and Waltz musette.

Charming and strong, a velvet e voice with a true passion for the storytelling, VIVIANA ZARBO very much knows how to hold an audience imagination, is definitely THE REAL DEAL........ the audience could not keep their eyes from the stage .... The Jazz UK